Thigh strength and muscle development is very important to an overall physique. Legs are perhaps the most neglected areas to train and exercise simply because they take a lot of effort physically to exercise. How many times have we seen an individual with a very well built upper body, to later find out they have weak or underdeveloped legs? Thigh training takes a toll on the body unlike any other as you fatigue and mentally drain. Having strong legs will help you in all sports as well as in daily life. The thighs are split into two major muscle group areas, the quadriceps and hamstrings.

The thighs in general are tough mentally and physically to train, when done so correctly. It takes dedication and commitment to build balanced thighs. For the quadriceps as well as the hamstrings, it is very important to use a full range of motion in all exercises. While training quadriceps, it is important to incorporate basic foundation movements with isolating movements. While training the thighs you will also target your buttocks as a secondary muscle. This is especially effective for squatting and lunging exercises. In addition, hamstrings are a muscle which must be fully stretched at the extension phase of the movement while trained. High reps are most effective for isolation movements, where low rep are for compound exercises such as squats can be a good muscle builder. You must also take care to stretch and warmup prior to any exercise, especially the knees and other susceptible joints. 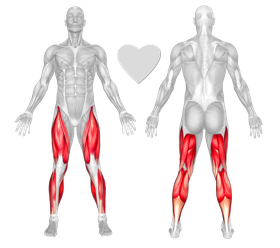 Exercises used in our workouts